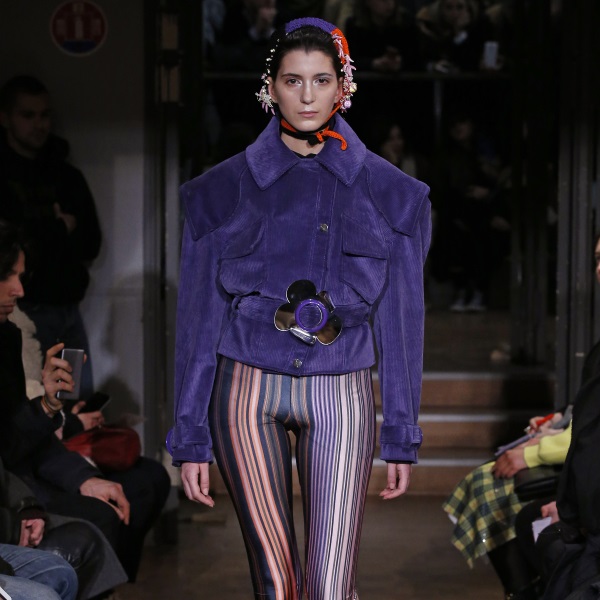 What is bad taste? Neith Nyer’s Fall/Winter 18/19 collection was an attempt to answer this question. This season designer Francisco Terra seeks to give a higher status to what is commonly considered distasteful by blurring the lines between vulgarity and elegance.

Presenting at Paris Fashion Week, The Brazil native designer was influenced by the parties his parents attended in Brazil near the end of the 80s. “It was nothing like Carnival,” he remembers, “People were not wearing costumes; It was all about fashion, and pushing the limits of the acceptable. Who would have the most ruffles on their dress? Who’d dare to sport the most garish clash of colours?” while his parents were out the designer was watching movies like The Never Ending Story or The Little Mermaid. The dreamy aesthetic of the images somehow linked him to those parties – A place of mystery and excess.

The key silhouette of the collection was built by taking in the seams of the clothes and topstitching them to refit the garment, a homemade-looking technique magnified by the use of silk and heavy velvet.

The Collaborations for this season are with prints by Mattias Garcia shoes by Zeferino  &  jewellery by Florence Tetler.

Boots teamed with the outfits were designed with shoemaker Zeferino using the same process – they seem like they have been captured in fabric. Cone shaped bras, slit in the middle for a glimpse of the nipple, give a bold and playful aspect to the silhouettes. The long dresses in liquid velvet embrace the shapes of the body and reveal more than they hide.

The colour palette used by artist Mathias Garcia are the same colours dominating the collection: Pink, which is already a major part of the brand’s DNA, is mixed with the traditional carnations of autumn: Orange, black and purple. Garcia created a series of exclusive paintings for the collection – The prints were inspired by fantasy movies while the jewellery, designed and created by Florence Tetier, portrays a series of eccentric little sea creatures.

All put together to create create futuristic looks, with luxury yet trashy feel by using ordinary fabrics. The collection was a full of mash ups and contrasts – ruffles, see-through fabrics, asymmetric designs, deconstructed denim, lace PVC and an ongoing floral motif.

Designer Francisco Terra grew up in Brazil and started his career in paris for houses like Givenchy and Carven. His brand is named after his grandmother.

From the Catwalk Seoul Fashion Week

Cottweiler AW19 – The art of cruising