Designer of the month Editorials 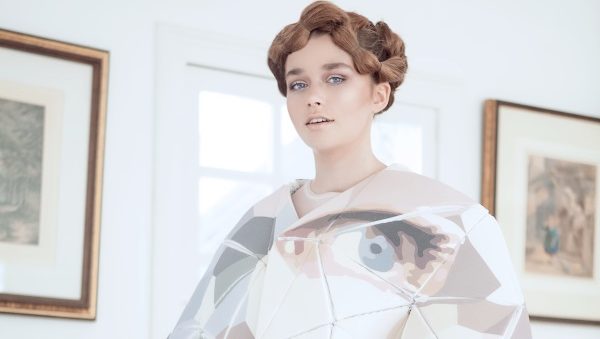 Fashion Design student, Gili Bruchstein, which presented her creation as a part of her studies at Shenkar College of Fashion Design had to choose a song, and create two sets of clothing using it as an inspiration. Both sets with the same shape but were executed using different materials. This was designed with Australian singer-songwriter SIA cover version to The Kinks song “I Go to sleep” in mind. The designer used Sia’s story as an inspiration – a celebrity trying to avoid the paparazzi in order to keep her private life out of the limelight. Bruchstein has built a rather graphic interpretation based on anti-biometric and digital defense systems built to protect Sia, and her heart in praticular. The jacket she designed is made out of 114 units of handmade triangles creating a unique and original print.

The second focus was for Yanky Golian who combined two sources of inspiration into one set of clothing – as a part of his studies at Shenkar College. The first idea, which is very obvious. is the fundamental fear of ‘Judgment day’ and a potential nuclear attack. The designer approached this idea with a hint of humor and drew inspiration from sterile gas mask hazardous materials suit, creating a clothing system designed to protect the wearer when the time comes. The suit, however, doesn’t look intimidating at all – and that leads us to the second inspiration: a rather optimistic story of a Taiwanese artist who found himself  alone in a remote village, where he began painting. His paintings helped him cope with the solitude and turned the village into a big work of art and a hub for tourists from all over the world. The village, called “The Rainbow village” inspired the captions and colours of the collection.

These inspirations emphasis the message behind ​​this design which is approaching life with humor and optimism, even when facing severe circumstances.

The photographer, Yael Bar Cohen is a graduate of the photography department at the Bezalel Academy of Art and Design in Jersualem. She currently works as a photographer at Yarin Shahaf’s makeup school, lives and works both in Jerusalem and Tel Aviv.  www.yaelbc.com

The striking silhouettes of THEO

Ella Levy – A tribute to the white city