A designer to watch – Yula Chistakova 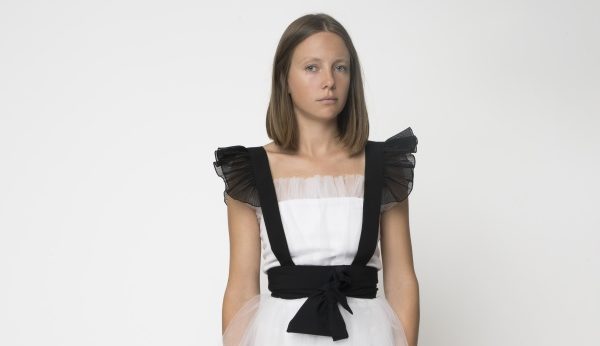 ‘Preservation’ is the name of a very unique collection created by young designer Yula Chistakova as a part of her final project at Kibbutzim College of Education in Tel-Aviv.

The fresh graduate majored in education, textile design and accessories, moved to Israel from the Ukraine at the age of 15. Her inspiration for the collection comes from her childhood memories. The designer created five sets of outfits that were deeply influenced by memories of movement and light at her childhood home, events she was part of, the taste of food she had as a child and her fashion influences as a young adult. Like the way people from certain cultures will preserve summer food in cans so they can enjoy them during the cold season, those memories are ‘preserved’ as images through her designs, different and at the same time similar, to the original experience.

Like flavours known only to locals, memories evoked from the collection will awaken childhood memories and certain experiences in people who grew up in Ukraine but will be perceived as exotic tastes by foreigners. The designer used her knowledge in engraving, sewing, embroidery, knitting and digital printing to create this nostalgic collection. “It was very important for me to get as close as possible to the textures of the fabrics as I remembered them” said the designer “each garment is a piece of history with its own identity and personality. By transferring the memory to the garment, you can also feel as you are wearing a memory, for example- my mum’s raspberry jam jar!’

The story behind this design was the traumatic childhood memory of her mother taking young Yula for a blood test. The fear from the test has engraved in her the memory the trench coat her mother wore that day – green with gold buttons. Pain or fear, made her rip off all the buttons from the coat. This look is a reconstruction of her memory of that certain coat.

Every house in Ukraine had a balcony with windows that were covered with two-layer curtains. One layer of thin white tulle to create privacy but to also to let the light in, and the second layer of a thicker material to darken the room and add beauty to the room. On summer mornings, Yula’s parents would open the balcony while she was still in bed and she would stare at the curtains while they were dancing in the wind.

The outfit created from this memory symbolises what they used to wear at home – a dressing gown with a robe over. The robe was created from a fabric the designer received from her mother. This fabric has been in storage for over 20 years and was originally used for sewing curtains.

In the ’90s, every girl in Ukraine dreamed of having this item in the closet – a lambda skirt. Yula was fortunate enough to own this piece of garments – A layered denim skirt which symbolised being fashionable. In her design, she combined anther memory into this outfit – of old photos with a wavy frame cut. the diameters were combined into a denim pinafore with the front shaped and cut with laser just like the old photo frame pattern.

Every winter, The family would open Yula’s Mother’s jars. Her favourite was the raspberry jam that was not only a dessert but also used as a miracle cure when she was sick. The shape of the Jam jars was translated into the outfit – to which the designer added stunning earrings designed from real canned goods that were sent especially from the Ukraine.

The first of September is a significant holiday day in Ukraine – The beginning of school. All students and teachers would gather for performances, singing and dancing. The students were dressed in black and white school uniforms – girls had a large, white bow tie in their hair that was part of the tight hairstyle. Inspired by these events, Yula designed her own version of school uniforms- staying loyal to the volume of the bow ties and to the traditional colours of the uniforms.